Got to hang out with an altogether international crowd. The AFS-USA Capitol Area Team holiday party. Students from around the world and those looking to go around the world, volunteers, host families, and holiday decorations – of course. 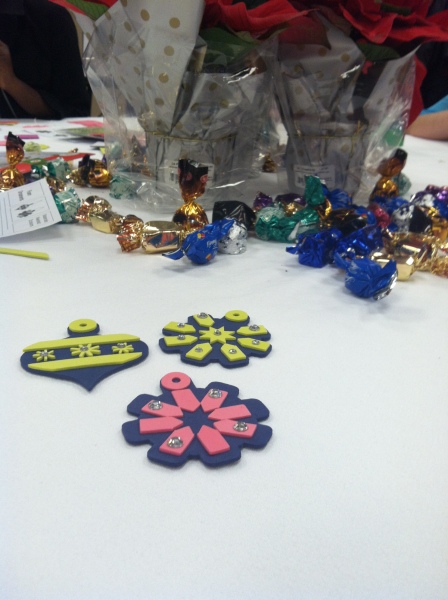 What a brilliant – and beautiful – way to stay connected as a family when distance gets in the way. This? Over facebook or messaging any day.

My student’s dance performance at Bullis went so fast. All of the nine weeks of teaching and planning and yelling for a room full of high school students to be quiet… all of it was over in what seemed like just a matter of minutes. They did a really great job.

It’s crazy how quickly this temporary teaching gig became just a part of my routine.

I don’t know how it happened, but I was completely blindsided by the ending.

On an unsuccessful journey to find gluten-free cupcakes in a mall, we instead stumbled upon this ad campaign by Lush. Still a bit confused on the connection between soap and anti-bullying. But hey, any campaign spreading peace and non-violence I can sure get behind. 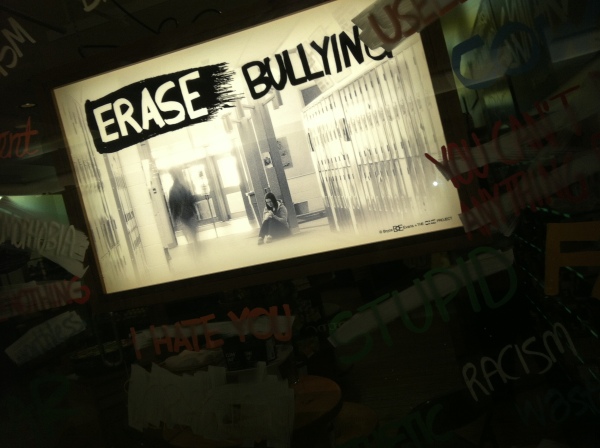 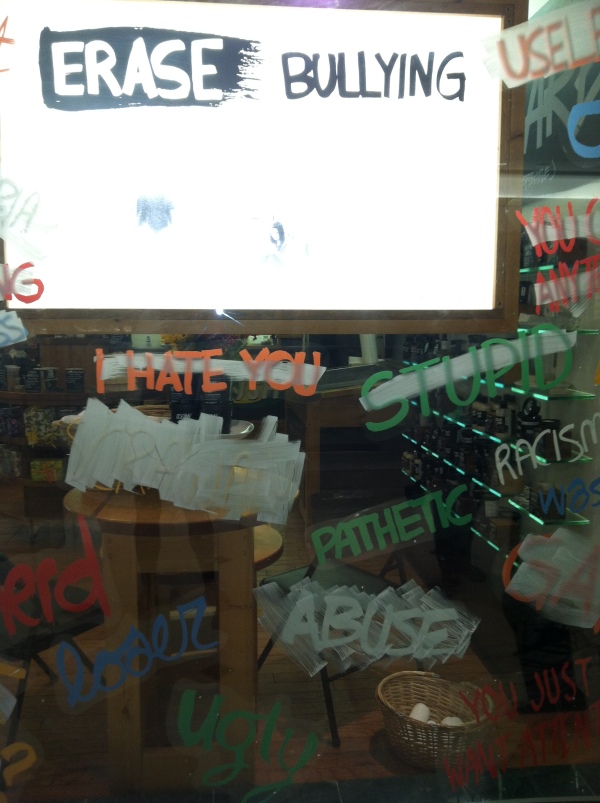 I’m not as prepared as I would like to be. Seems my affinity towards procrastination is a hard habit to shed.

I’m sweating. Embarrassingly, profusely sweating. The kind students make fun of behind teacher’s backs while walking in the hallways to classes. ‘Did you SEE Ms. Emily’s sweat circles??’

I have a lot to offer this group of young, aspiring dancers. I’m delighted to be working with them.

Ask me how I know the world will be alright.

With all of the hate and injustice and war and sadness that surrounds us.

Ask me, and I will tell you it is because I saw this movie. 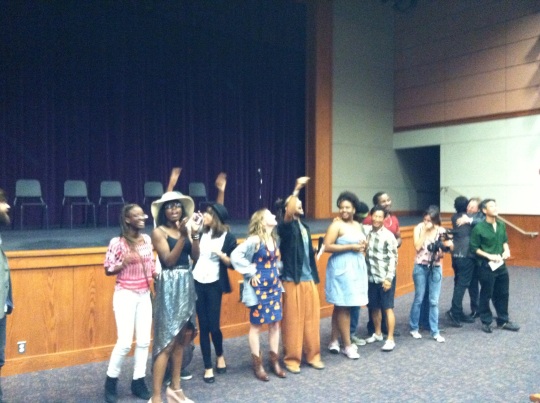 Fly By Light, a film by One Common Unity, literally changed the lives of fourteen Washington, DC teenagers. And also, it is fair to say, the lives of the adults who created the movie with them.

And I can say, without a doubt, that this – this is the real thing. That these people, and now this movie, are making the world a better place. This is what lasting change looks and feels like. One person at a time.

Because at the end of the day, there is no magic potion or sum of money or Hollywood ending that makes it so. No. This is the real thing because each and every one of the contributors of the movie offered respect and love and compassion and belief – belief that these young people are worthy. That, my friends, is where the true magic lies. We don’t always have the right answers, but we always have what’s in our hearts. And that is enough. This movie is proof that it is enough.

I don’t want to give it all away. I want you to see it, and be moved by it.

But I will say that to see not only the transformation on screen, but also in person as these brave young people shared their stories, their lives, with us – this was an incredible thing.

Also, I should note – I am definitely not a thug (not that this was ever really in question) because I certainly shed more than a single tear while watching the movie. (If you’ve seen it, that will make sense. Otherwise, just take my word for it…)

Ask me how I know the world will be alright, and I will tell you to see Fly By Light.

And then you, too, will know.

Yesterday was a terribly sad day in America.

George Zimmerman was found not-guilty. Justice in America does not seem to exist.

I posted this sentiment on my facebook page, which garnered ‘likes’ from various acquaintances (which, if I’m being honest, felt terribly uncomfortable – to be receiving ‘likes’ for something so tragic.)

One of the people who ‘liked’ my post was a former professor at a college I formerly attended, for a very brief period of time. I never met her in person, but respect the work she has done.

She asked on her page this morning if we have become complacent in this facebook era – if we are now willing to post about injustice and then return to posting ‘stupid pictures of dogs.” It felt as if she was speaking directly to me. (It’s true, I posted a ‘stupid picture of a dog.’) While it made me uncomfortable for someone who doesn’t know me to make such a public statement about my flaws (or again, what seemed directly, if passively, targeted at me), she was, in essence, correct.

I want to cry and yell and hug every mother and child I come across. I want to demand justice – too late and never, ever enough – for Trayvon Martin and his family and all of the boys who have watched this trial and seen that their lives are not worth as much as a man with a gun and a privilege he was born into but does not deserve.

I don’t know how to take part in a broken system, a broken country, that does nothing to protect innocent lives and everything to protect money, power, whiteness. I surround myself with progressive, outspoken, artistic, creative, positive members of this society who are doing so much good just by being themselves and sharing with their communities. I forget that most of the country does not operate this way.

This is my confession: I’m not doing enough. Plain and simple. I – someone who prides myself on ‘doing good’ and helping others – I have no idea where to start. I have no idea how to take part in making real, actual, lasting change. Through art, and working with young people, and continuing to live my life purposefully, yes. But within the political and judicial system, no.

I do know that we must all demand justice for Trayvon Martin – loudly and publicly and nonstop. As this woman also said in her post – “If this doesn’t get lots of people off of their couches and into the streets, then nothing will.”

I’m pressing the publish button on this blog post, closing my computer, and I am getting off my couch… now.

When I was living in Philadelphia and working (extremely hard) in a middle school, I felt fulfilled in a way I hadn’t before. But I also felt I was missing something. The creativity piece. I complained (mostly to myself, but also a good bit to my family and friends) that I didn’t have time to dance, to create, to work on my vision of owning and operating my own arts organization.

I don’t have those excuses anymore. I’m not living in Philadelphia, nor am I working in a school. And yet, here I sit, about as far away from realizing my dreams of creating and being surrounded by art as I was then. (Well that’s actually completely a lie – I did take the plunge and quit my job and move, so there’s that.)

It turns out, just the absence of the thing you say is standing in your way doesn’t mean you will actually stop standing in your own way. So now, it’s time to figure out how to two-step around myself.

Some dance inspiration that came my way today. Which I am now passing along to you.

We are always so quick to want to inspire younger generations – to impart our wisdom on them. But sometimes, it’s important to step back and realize just how much they can inspire and teach us. Case in point, this video. Let’s be clear that BOTH of these young dancers did their thing. But man oh man, this little lady sure did own that stage.

And these photos, courtesy of my dad, who recently returned from a trip to Buenos Aires: 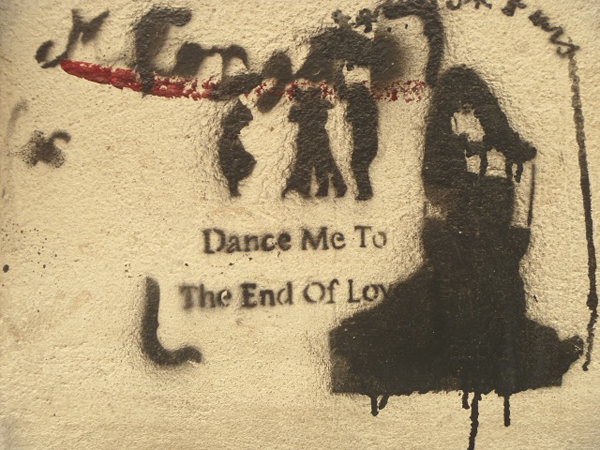 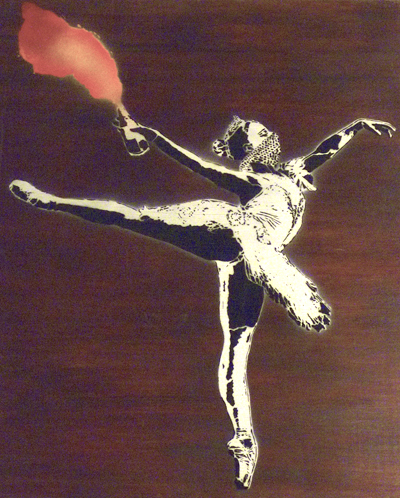 I have been running around like crazy trying to get loose ends tied up before I leave tomorrow: Leave things at work tied with a pretty little bow for my successor; take care of my life details so nothing can come unraveled; wrap my feelings up tight so I don’t have a moment to think about the major shift that is taking place beneath me, within me, above me.

I haven’t felt like any of it has been particularly creative. I don’t have much to report tonight. But my students and coworkers, they created such sweet cards. I share those. As well as a few pieces of 14-year-old wisdom that they have offered:

1, “Dance is the answer” (I already knew that one, but glad to have a middle schooler reaffirm it)
2. “Once a Young Scholar, always a Young Scholar”
3. I am… “da bomb”