It’s been over a month since this project ‘ended’ – since I have posted anything. I am still trying to figure out ‘what comes next,’ and have in the meantime, been participating in #100happydays via Instagram. It’s been a nice way  to stay focused on the positive things I have in my life. Of which there are a very many. I also have several friends participating alongside me, and it’s fun to track their progress and cheer each other along. It’s not, however, the same as posting here. The self-reflection and learning and evaluation is of a lesser degree. Which isn’t a bad thing. It doesn’t have to be all serious all the time. (I’m saying that as a reminder to myself.) It’s just, it’s hard to go cold tofurkey on this thing that was a life-force really; a vital component of my inching forward in this crazy universe and trying to maintain some ounce of sanity. Or not. (Hey it’s OK, I embrace my weird and crazy.) But at least, it kept me grounded.

I still don’t know what’s next. I feel, actually, like I know LESS now than I did a month ago. But I have to believe that means the tipping point of this monumental change my life course has been on the past year is finally. painfully. almost. here.

But for today, on this damn snow day when I neither feel like being locked inside nor being outside in the freezing cold (which would also mean being around other people), it felt important to return to this stable base of mine. And for today, I’ve been thinking a lot about courage. Specifically, Brene Brown’s TED Talk and what she refers to as the original English definition of courage; ‘telling the story of who you are with your whole heart.’

[WO]man I love that sentiment! And it hit me square across the face that I’m not living from this place. Not even a little bit.

A little while before stumbling across this video and realization, it was pointed out to me that I do a lot of finger pointing,  and not a whole lot of sharing and opening up of my own. I’m feeling exceptionally vulnerable and weak (although I try to hide it as best I can out in the world). And in a time when all I really want is comfort and support from those around me, those I care about, I’m doing the exact things to push them away.

So, there’s that question again. Now what? Hell if I know.

All I do know is, if vulnerability is the key to a happy life as Brown’s research suggests, then damn it, I should be the happiest person alive, cause my vulnerability meter is off the charts these days. What is missing is my ability to embrace THAT part of me. So. Now. On to embracing and loving and opening up in a genuine way, no matter the outcomes.

Living with my whole heart here I come. 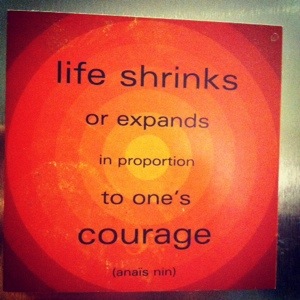